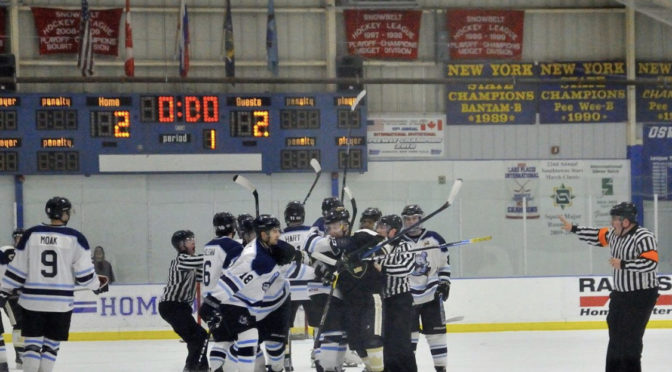 Round one of the 2018-2019 NA3HL Playoffs is set to begin this weekend for the Stampede. The team is preparing to take on the Skylands Kings in a rematch of last weeks final home-stand in Oswego, NY. The Stampede will once again host the Kings in a best of three series this weekend at “The Fort” on Friday March 15th at 7:30 PM and again on Saturday at 2:30 PM. If a third game is needed the team will have to make the trip to Stockholm, NJ and play at 6 PM Sunday evening at “The Skylands Ice World”.

The season series between the two teams has been in favor of the Kings but games have been tight and at times very chippy between the Northeast rivals. “Last week wasn’t our best effort for sure with things being set and guys knowing where we sat in the standings” States Stampede Coach Travis Hyde. “You want your players in the playoff mindset coming into it but it is not always the case and its something they have to do to be successful this weekend for sure.” added Hyde.

The Stampede have the ability to make a strong push in the playoffs this season if they get back on their early season track that helped them to defeat the division champion Binghamton Senators twice in November. “All Year long we preach, Discipline, Composure and team play at both ends of the ice. Some guys get it and some guys just don’t. This weekend it is needed from every guy on the bench.” States Stampede Coach Mike Beavis The Stampede are one of the least penalized teams in the NA3HL and that could play a huge part in this weekends first round as special teams could play a huge part in the series outcome.

Stampede Coach Mike Beavis went onto say that this weekend is huge not only for bragging rights but for players to get some extra looks from colleges still trying to fill spots for next season. “With us its all about promotion of our players, we have a great deal of our guys that have already committed to schools for next season including three NCAA D-3 and several ACHA D-1 and D-2 guys. It would be great to sew up the last few guys over the next couple weeks for sure.” states Beavis. The Stampede keep it simple for sure, help develop their players for tier 2 or the college level of play based on talent, age and objectives as well as to educate them on becoming better rounded players in systematic play along with composure and discipline.